Some comments on an aging population and demand for securities


According to USA Today, there are approximately 79 million boomers in the American populace and the first wave of them turn 65 in the next year.

Wealth managers, brokers, investment advisors, financial planners, and family office guys will all feel the effects of this retirement onslaught, but nowhere on The Street will it be felt more than in the mutual fund complex.

I'm picking on him because he is linking to garbage. The linked USA Today article says:


The past three months alone, the average stock mutual fund has shrunk by 10%, according to Lipper, which tracks the funds. The past 10 years, the average stock fund has gained an average 0.2% — far below the stock market's average annual gain of 9.7% since 1926.

Ummmm, no. is 10% in terms of clients? Assets under management? Could this be caused by the recent draw down in equities? Where does the author get off trying to make a point saying MF assets have only grown by 0.2% per year over the last decade? That's clearly measuring from the 2000 peak (S&P @ 1,500) of a bull to somewhere in a bear market. Maybe assets didn't grow because valuations are actually lower now than they were in 2000--substantially so. How does the 1926-present average have anything to do with anything? Also, has the writer ever considered that MF assets could shrink as people move to ETFs or third-party money manager services?

Finally, I have a bone to pick about the Boomer issue. I just don't buy it. I think the whole thing is blown out of proportion. I've seen commentators on financial blogs speculating about the effect that these new "net sellers" are going to have on equity markets, and I think it'll be negligible. Here's some of my thoughts about this: 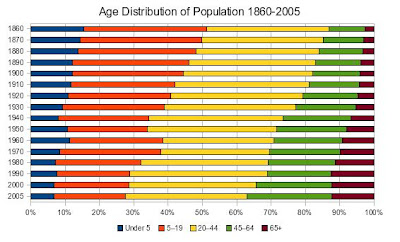 On top of all of that, the Baby boomer effect isn't even that big. There is definitely an increasing number of people in the 65+ category, but the pain is not as going to be as concentrated as TRB made me imagine it was. I agree the aging population theme is going to be an issue, I just think it will be very drawn out and won't start for a couple of years. Should we keep an eye out for what the Boomers are collectively doing? Absolutely. Should we really be worried valuations are going to change in the short-term as a result of their retirements in the next year? No way, that sounds a whole lot like Y2K to me. Hell, worst comes to worst, this is America, all you have to do is let some young immigrants in. 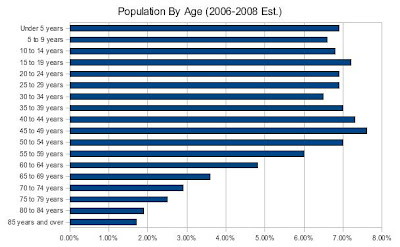 Sorry Josh. I hate to pick on you, but what the hell are you doing reading trash like USA Today????
By Unknown at 4:30 PM