This post is part of the series Housing Affordability 1971-2009
In the last post I discussed the comparison I used for this analysis and why I chose certain data series over others. In this post we will look at long-term trends in income and prices and how lower interest rates have allowed prices to rise faster than income. Rents and the CPI less shelter figure are also included to illustrate the divergence of the trend home prices from the trend in consumer goods.

I am excluding shelter from the CPI figure because I want to display how the trend in housing differed from everything else and comparing housing prices to an unadjusted CPI would understate the growth in prices.

For rents, I decided to use the "rent of primary residence" series in the CPI. The BLS does not publish rents in their average price survey, and the only nominal figure I found came from the HUD, and after looking at collection methods, I was not impressed with the quality or coverage of the survey. Since the Census Bureau does not offer a national figure, I am still looking for better rents data1.
Long-term trends
As you can see below, housing prices grew much more rapidly than income, and both outpaced inflation less shelter. 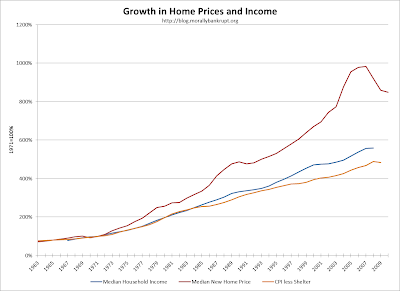 Even though home prices grew rapidly, falling interest rates meant that the monthly payment required to buy a home grew at a slower pace, although still at a faster pace than median household incomes and rents. During the same time, rent expenses grew at a slower pace than household incomes, and generally trended with CPI ex-shelter. If it wasn't for falling interest rates, home ownership would have not been possible for many over the last twenty years. 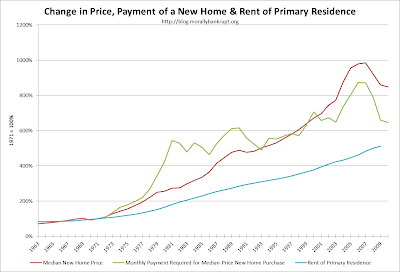 The gap between the red and green lines is the effect interest rates had on the payment required, and it's there one can see how lower interest rates allowed prices to swell while incomes grew only marginally faster than the general price-level. I don't think it's a stretch to blame lower interest rates to the rise in home prices. I also think that housing prices would be lower if it wasn't for the extraordinary loose monetary environment we are currently in. Additionally, I expect rising interest rates to be a real drag on future home price appreciation; however, if we do enter a long deflationary cycle, it could take many years to get to that point.

In the next post, I will show how prices, required payments and borrowing capacity changed over time and I will discuss why I believe interest rates will remain low for an extended period of time; it will be the last data post. The post after that will include collection methods, sources and will include a link to the entire data-set in excel format for others to use.

1 Problems with using the BLS' rent data:
A possibility for improvement here is building a model that adds up mortgage interest, depreciation, expected capital gains and a required return-on-capital to model the equivalent fair rental price using techniques borrowed from a no-arb model. This is a much more involved undertaking and subject to its own problems, but I would be happy to collaborate with anyone who would like to make it happen
By Unknown at 8:57 AM