Labor: To the Moon!

A year ago I wrote about the coming sectoral re-balancing, with a focus on the imminent increase in the share of labor income at the expense of corporate profits due to an increase in labor bargaining power, declining labor slack, recovering aggregate demand, and increase in public sector employment as a result of improving tax receipts. Let's re-visit how this all panned out. Capital formation? Up as both Net Investment and capex increased.

The average YoY% increase in aggregate wage and salary disbursals was 4.3%, north of the 4% average increase for the first three quarters in nominal GDP. 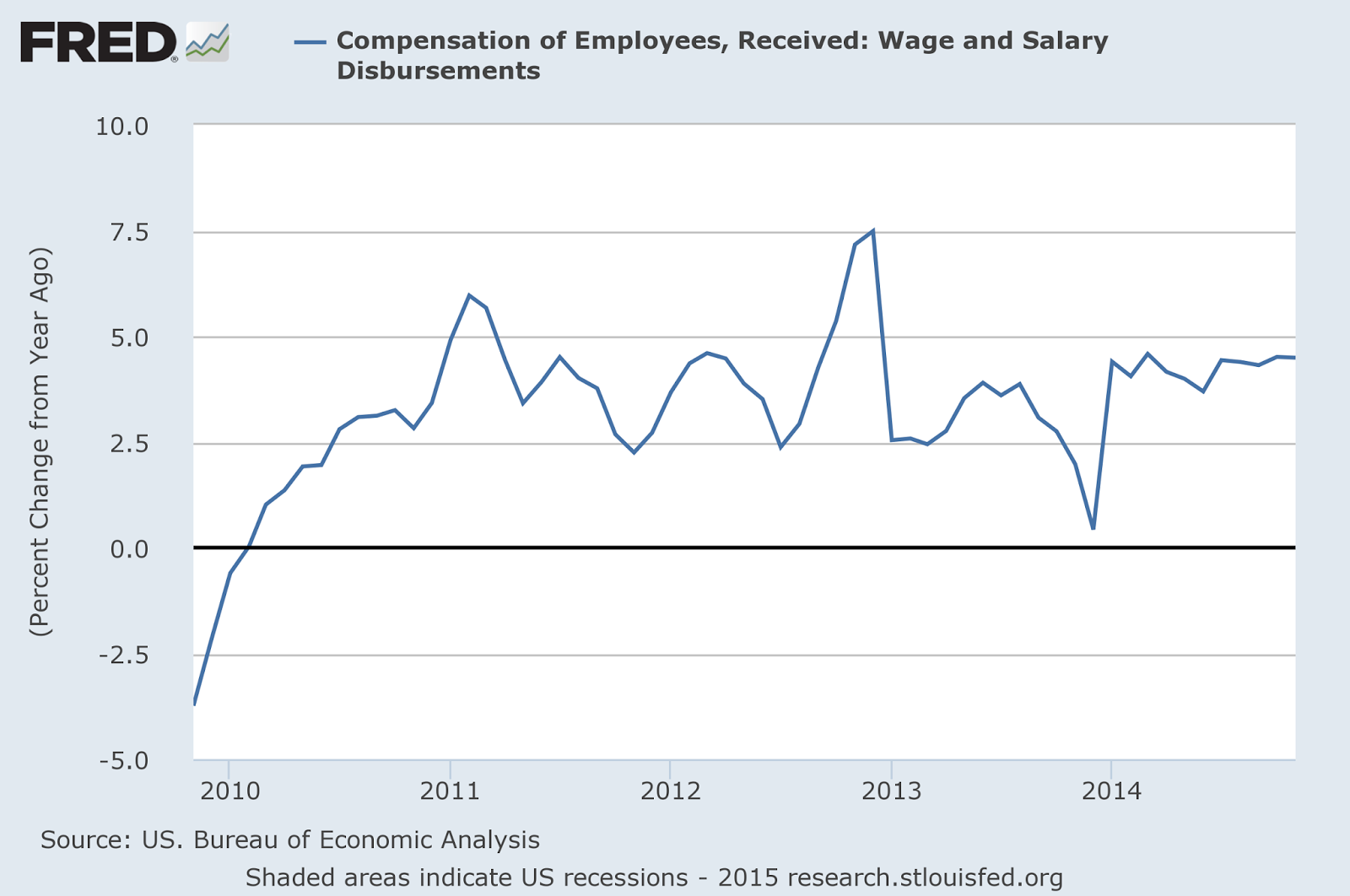 Also showing robust growth, was Income & Employment Tax Withheld (the stuff withheld on your paycheck) which increased a total of 5.3% for the year as a whole, a clear indicator that more people earned more money. 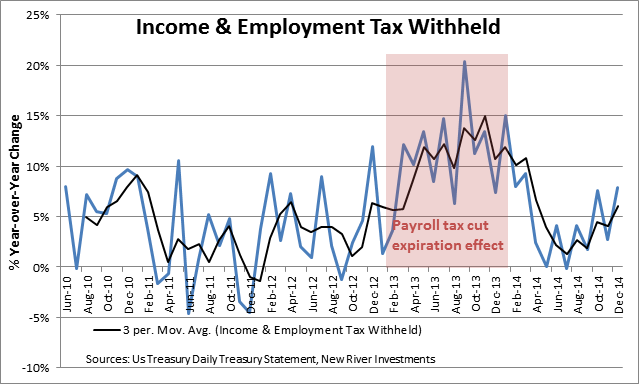 And, for those who think we still have a lot of labor slack to work through, I present the following chart. At the current pace of job gains, we are a couple of months away from full employment. As the blue line falls below zero, labor bargaining power should really hit traction leading to the increase in real wages and inflation that will eventually lead to the next recession (which is still years away). 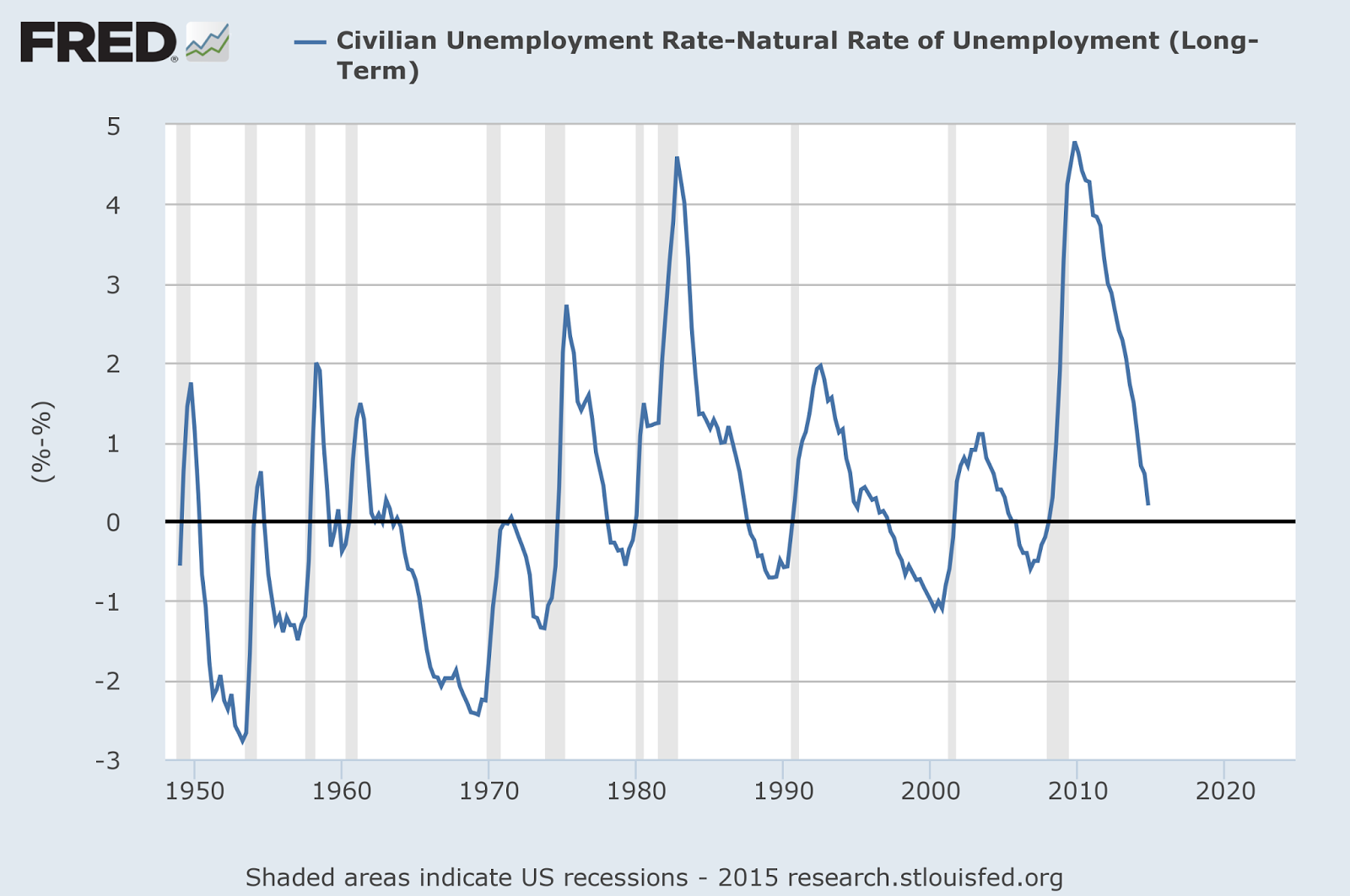 Far from being a drag on the labor force like it was last year, public sector employment has now become an impulse tighter, and it's growing at an accelerating rate, with a whole lot of room to run as those increasing tax receipts translate into new jobs. 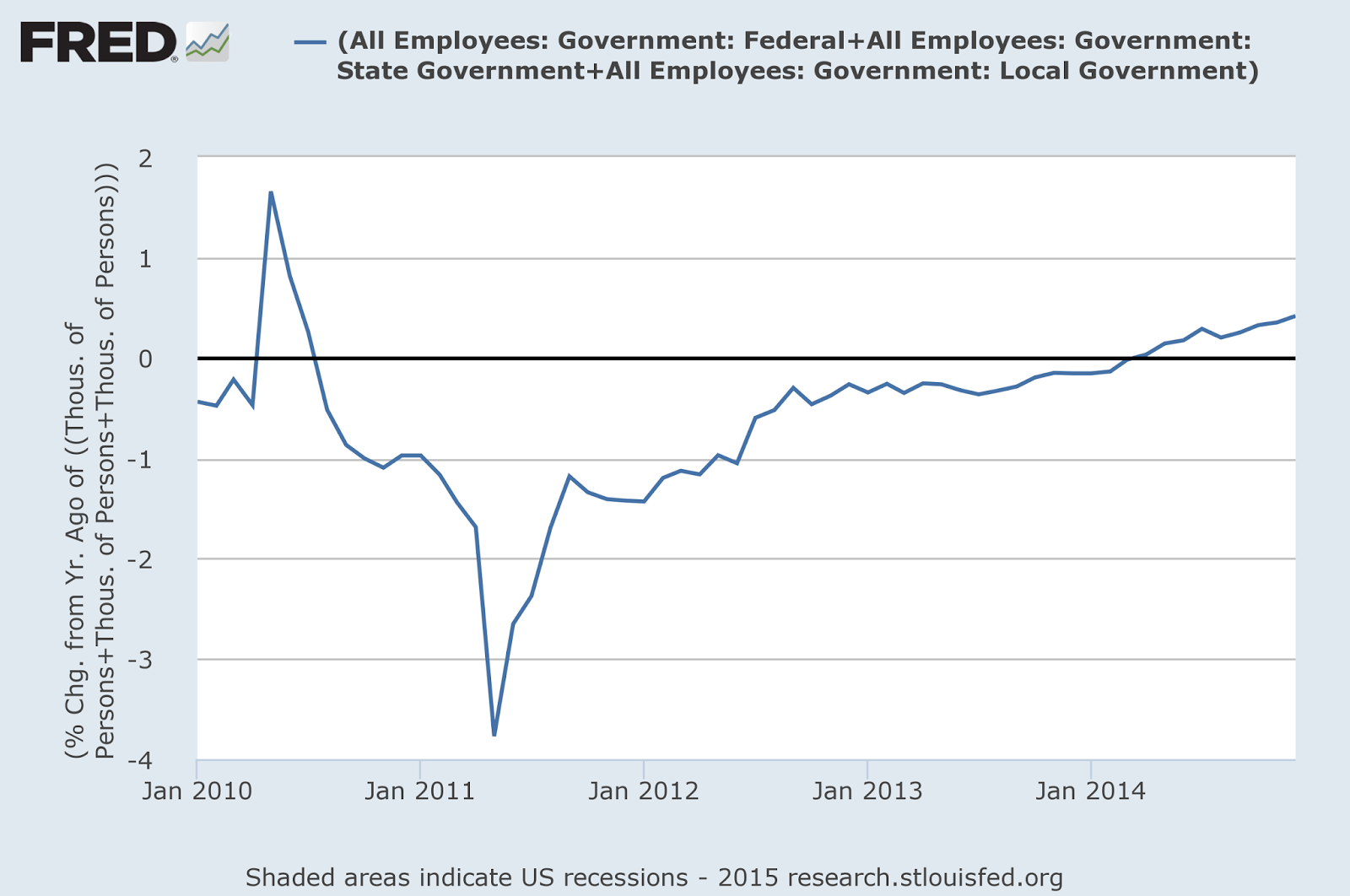 The corporate sector will try to cut costs but Q1, 2 & 3's federal government tax receipts on corporate income for were 21.6%, 38.1%, and 33.9% higher than the previous year leading to a SAAR of over 500B in corporate income taxes paid. For calendar Q4 (fiscal 1Q15) the increase was even larger at 41.8% YoY (no seasonal adjustments). The effective tax rate of the corporate sector is going nowhere except up until legislation changes it or we get another recession. The marginal dollar of sales goes increasingly to the workers and the government. If you believe in micro theory, this is the aggregate result of firms increasing the quantity supplied until marginal net profit is close to zero.

As I said last year, the gap in quality between the mean and median household balance sheets (wealth skew) has probably peaked and is headed nowhere but down and the accumulated stock of corporate sector savings is being transferred to the household and public sectors. We are way past #PeakPiketty. 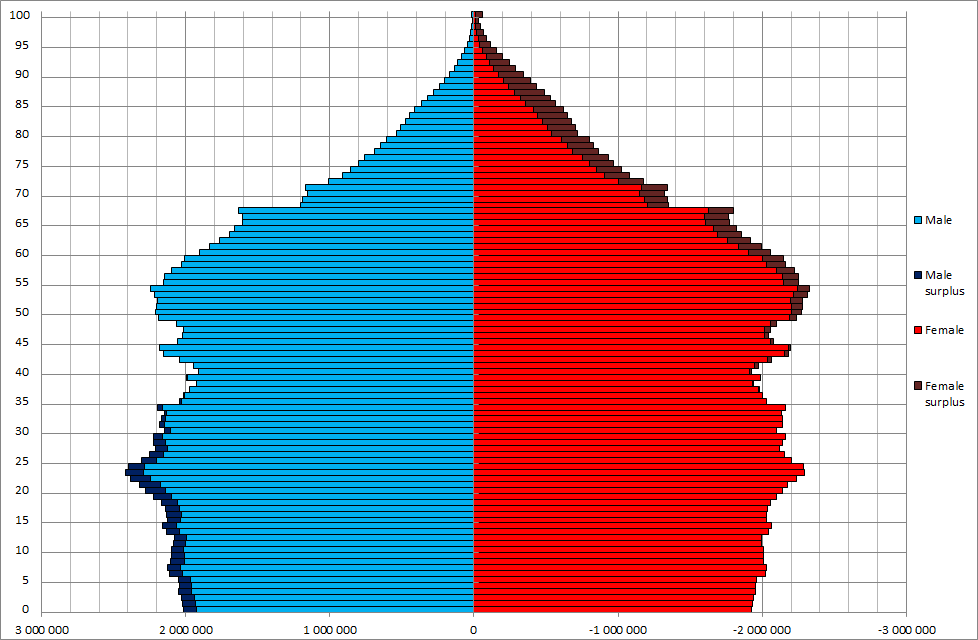 We are only getting started and labor is only going to get tighter from here until the next recession from a cyclical perspective. Additionally, as the growth in the millennial "echo boom" is increasingly digested into the labor force and retirement of the baby boomers progresses, it is likely that we will not see another large expansion of the workforce until millennial' kids enter it, and given low birth rates, that's not going to happen for another 2-3 decades. It's going to be a long, long ride UP for labor, and anyone betting on technological unemployment, secular stagnation, continuing rentierism or cost-push deflation is going to miss one hell of a p&l party. Oh, and for those worried about what CEOs get paid: It's going to be a lot harder to get large bonuses and raises for executives when net margins are declining in the midst of an expansion. Expect increasing pressure on executive compensation as traditional measures of profitability and efficiency decline.

And, just to clarify one more time: labor tightness, labor bargaining power, and wages are going nowhere except UP.  And wealth/income-skew (sometimes called "inequality") is going nowhere but down.