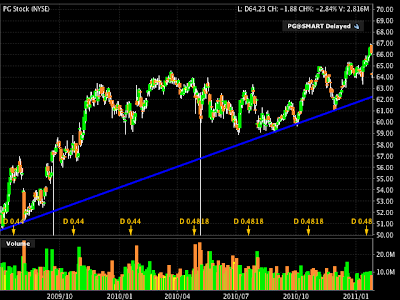 Watch the next few hours in $PG trading. The Feb 18 62.50 PUTs sold at this morning for up to $0.40. If we see the day turning for the worst, I'd say this would be a nice trade if you are looking for some delta-positive exposure. Will PG fall and hit it's trendline again? Maybe, but the general updraft is powerful and I wouldn't put my money on the short side. Plus, we have GDP numbers tomorrow and, uncharacteristically, I'll take the over on the 3.5 estimate. If you are expecting GDP numbers to disappoint, you might want to wait.


Disclosure: No position yet, but if I can get a good price, I'm looking to sell those PUTs.
By Unknown at 10:12 AM No comments:

Just a small note on $NFLX and growth rates

According to the U.S. Census Bureau, the average household size is 2.6 people and the total US population is about 312,000,000, which gives us an approximate 120,000,000 households. If Netflix (NFLX) has 20,000,000 subscribers that is one-sixth of the households in the US. One-sixth might not seem like much, but take in mind only about 58% of American households get cable and Canada only has like 13M households.

According to this Arstechnica post, the U.S. has about a 60% broadband penetration rate. According to PEW Internet, this is closer to 66%. That gives us a total target market of 79.2 million households for "watch instantly", of which Netflix already captures 25%. While broadband penetration is likely to continue increasing, and so is the population, I would think that eventually their growth is becoming seriously limited in the U.S. While netflix does have some tailwinds in it's favor--like computer processing power getting cheaper and cheaper every year--barring signs of international expansion (outside of it's recent entrance into Canada), it seems to me like the growth rates like we've seen in the past will soon be history.

Let's look at what ValueLine has to say on growth rates:

OK, so revenues can grow from increasing prices, buuuuut, I feel like everyone I know with Netflix is actually downgrading it since "watch instantly" is generally good enough and the whole mail thing for newer titles just does not appeal to the instant gratification we want. We can just rent it from iTunes!

But, seriously, assuming no further price hikes and stable revenue-per-subscriber, we are talking about a tripling in the subscriber base to 60M. You may be thinking that's totally doable, but take in mind iTunes and Hulu are becoming real competitors, oh, and there's also that Cable TV thing...

I mean, if you want to buy the stock, whatever, I don't care, just keep in mind that fantastical growth rates are  not going to continue forever, at least not without international expansion. If you are buying NFLX betting pretty soon people in Europe, and Australia are all going to be watching Netflix, that's cool, just remember that outside of the rich first world, demand is likely to be very limited. Oh, remember that even if competitors eat Netflix's dust, you can bet your ass content providers will keep on trying to squeeze every dime they can out of Netflix, so keep an eye out for some compression in that net margin.

I mean NFLX is cool, it's one of my favorite services and I've been a paying member since it's first year of existence, but at the end of the day, it's just a content delivery method. Just like Hulu or cable or the FiOS TV service. The comparative advantage in the company lies in their recommendations and ratings database. Right now, they are using it as a way of keeping people from switching--nobody wants to lose all their ratings--but that's not a good long-term strategy. That data is a marketing and targeted recommendation wet dream and I'd love to see them find a way to monetize that. Amazon and Apple seem like the perfect candidates for that, as they would get the biggest benefit out of being able to deliver higher-quality targeted recommendations, but they are also competitors in the space, so I foresee no friendly cooperation in that space. If , however, Netflix suffers a sharp correction, I wouldn't at all be surprised to see an acquisition taking place.
By Unknown at 9:12 PM No comments:

Unemployed workers with no unemployment insurance