Must read from Interfluidity

Even in a depression, cutting expenditures to entrenched interests that make poor use of real resources can be beneficial. Even in a boom, high value public goods can be worth their cost in whatever private activity is crowded out to purchase them. Rather than focusing on “how much to spend”, we should be thinking about “what to do”. ... If we do smart things, we will do well. If we do stupid things, or if we hope for markets to figure things out while nothing much gets done, the world will unravel beneath us. We have intellectual work to do that goes beyond choosing a deficit level. The austerity/stimulus debate is make-work for the chattering classes. It’s conspicuous cogitation that avoids the hard, simple questions. What, precisely, should we do that we are not yet doing? What are the things we do now that we should stop doing? And how can we make those changes without undermining the deep social infrastructure of our society, resources like legitimacy, fairness, and trust?

Ummm, yeah, what he said. I've been trying to make that point for six months now, but Stever just blew me away with how well he presented the argument.

Previously:
"My biggest criticism is the assumption that the fiscal stimulus will be spent in value-creating projects / activities--I simply don't think politicians can be trusted to do this." -- From my review of The Holy Grail of Macroeconomics

"Sometimes I really wonder if policymakers understand that the best and most sustainable path to increasing your wealth is not to take someone else's, it's to create your own." -- China, bubbles trade-wars and balance of payments

"For example, if RMB 100 is borrowed to build a railroad, the debt is sustainable if the railroad creates net economic value to China of RMB 100 or more. If it doesn’t, the difference must be considered net debt that one way or another must be paid for by Chinese households." -- Pettis on debt-fueled stimulus
By Unknown at 4:19 PM 3 comments:


China is faced with a difficult policy choice. It can maintain an undervalued exchange rate, it can run the risk of inflation, or it can increase the domestic costs of financial repression. How Beijing balances these separate forces will determine the pace and form of its necessary rebalancing.

Which is much along the lines of what I wrote a couple of weeks ago. As always, I highly recommend reading all of Pettis' blog, which is very informative. What I found most interesting this time around was his discussion in inflation. In a closed economy, a rise in productivity increases the amount of goods provided, leading to price decreases as the number of good rises and the amount of money stays the same. In this scenario productivity increases and money supply growth can coexist and maintain price levels stable, even if a small amount of money is being printed.


“I don’t fully understand movements in the gold price,” Mr. Bernanke admitted. But he suggested it might be another example of investors fleeing risky assets and flocking to assets that are perceived as less risky, not only Treasury bonds, but also ones like gold.

It also might have to do with that quantitative easing (e.g. money printing) thing. Or maybe that competitive devaluation (e.g. fiat currency race-to-the-bottom) thing we are experiencing. We havn't seen major effects in price-levels as a result of the money printing because of both a lack of demand for loans, which has kept the money supply from materially increasing, but that doesn't mean people like it when you indiscriminately print money to buy $2 Trillion of shitty agency paper, Mr. Bernanke. Or, maybe, it's just a bubble.

In case you think you are just so smart buying gold to protect yourself from inflation and stick it to the man, you are not. The collectibles tax on bullion is 28%. That means that if the currency collapses and gold goes up 500% your nominal gain is 360%. If prices increase by 400% in addition to this, your real return is actually -8%.


As economic fears drive gold prices to new highs, the creator of a gold-dispensing ATM is attracting attention around the globe.

Germany-based GOLD to go, which is currently churning out 50 gold machines a month to meet a recent jump in demand, launched its first ATM in Abu Dhabi's Emirates Palace Hotel earlier this month and opened its second in Germany last week.

"We are going to make gold public with these machines," said Thomas Geissler, CEO of Ex Oriente Lux AG, which owns GOLD to go. "The prices are so easy to control that we're going to de-mystify gold and make it easier for anyone to buy it."


I first saw these machines a couple of months ago online and dismissed it as yet another destined-to-fail luxury service designed for high net-worth individuals. I don't really understand how so many people can come up with expensive, useless shit and expect wealthy people to buy it, just because they can afford it. Anyway, it looks like the gold vending machines are gaining popularity, which to me says: "Bubble!" Buy into gold if you want, I don't care. Just make sure you sell out when you start hearing tales of people buying Kugerrands with their credit cards and flipping them before their payment is due. This is totally going to end in tears. Oh, by the way, remember when cash-for-gold was all the rage two years ago?  Retail investors really are a bunch of mouth breathers.
By Unknown at 8:54 PM 1 comment:

I don't like to talk about gold because people feel very, very strongly about the shinny stuff. The Europeans don't apply a VAT to it because they consider it money, the gold-bugs are a crazy bunch and, at the end of the day, it's just another fiat currency. Maybe we can't print it with ease, but we sure can mine it.

Anyway, digressions aside, the WSJ has some spectacularly bad advice about gold:

The call-option strategy "is a way of buying exposure cheaply," says Alan Lancz, a money manager for institutions and wealthy clients in Toledo, Ohio. He says it lets investors use "a small amount of money to get exposure even when prices are this high."

Ummmm, no. You are not "buying exposure cheaply." It's actually quite expensive and, believe it or not, there's lots of options traders and market makers out there making sure it's not "cheap." At $16, your break even (not counting opportunity cost and transaction fees) is $136. Sure, you have a year and a half, but gold has almost quintupled in price in the last 9 years and almost doubled in price in the last two. If you consider that trend will keep going, the calls might really be a great deal, but someone is selling you that call for a reason, because they have reason to think it won't happen. The March-November retracement of gold in '09 dragged gold down 30%. The long term trend is upwards, but there is significant dips in the interim. Considering the last giant gold market in the 1970s lasted about 10 years... You catch my drift. In any case, maybe gold will go parabolic--I don't know or care--in which case you would be better served by buying cheaper out-of-the-money calls. By cheaper, I mean each contract costs less money, because the options still have the fat tails priced in.

Secondly, why not gold miners? If you want to speculate on the price of gold increasing, gold miners would be a better bet because of the implicit leverage and your downside is already covered if you are using calls. Gold storage isn't cheap and GLD has a costs and management fee that makes returns drag, so just go for the gold miners. At least they generate profits instead of just piling on costs.

Lastly, buying at-the-money calls in this scenario is an expensive move to make and it's not even that effective if gold does go parabolic. It takes a climb to 136 to get to break-even and after that, you have the same exposure everything else does, except you paid more for it. If gold went to 200, for example, you'd have a return of 400%, but if you bough the 150 calls for 5.71 you'd be up 600%. What I am saying here is that buying ATM is not a good strategy if you think the movement upward is going to be huge, it's more suited when you have a top in mind, in which case you'd be better served by using a long call-spread to lessen your costs. 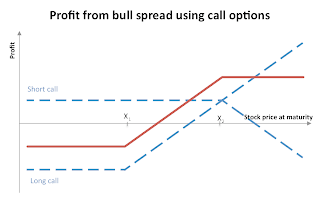 If you had bought the 120 calls and sold the 180 calls for 4.45, your break even would have dropped to 131.55 and your return would have been 524% for a similar move to 200. Even better, you could setup a long call-spread on the mining calls with 3-month options and adjust your max gain/pain to your personal parameters and roll over the calls whenever you either enter max-gain territory or when they are about to expire, which is functionally equivalent to a zero-cost collar. That way, if we see another re-tracement, like we did in '09 you could limit how much you lose on a potentially worthless call.

What I am trying to illustrate here is that buying "unlimited upside" is expensive, and if you are willing to give up extreme events, there's better returns to be had in other bullish strategies. You can set up a spread or collar and keep moving it up as long as the asset does well to lock-in gains while still maintaining limited downside. Maybe gold will quintuple in the next 18 months, I just would rather not wager on that event.

Image credit: WikiCommons
By Unknown at 3:42 PM No comments: