I decided to start adding some book reviews to the blog as a way to keep track of what I've been reading, disclose where some of my ideas and views come from and share both good and bad experiences. I am far from an authority on anything, but I hope someone finds these useful.

Richard C. Koo, Chief Economist of Nomura Reasearch Institute is probably best known for his balance-sheet recession idea that following large credit-fueled asset-price bubble collapses, a private sector finds itself indebted and holding assets that are "underwater," or worth less than the debt used to finance them. Technically, any party in this situation would be insolvent, but if the company still creates healthy profits and can meet it's obligations, it can continue as a going concern. Koo's balance sheet recession lies in the idea that in the environment previously described, the private sector will cease to focus on profit-maximization and instead focus on debt minimization, paying down debt as fast as cash-flows allow so as to get back to solvency.

About the book
In The Holy Grail of Macroeconomics: Lesson's from Japan's Great Recession, Koo uses the idea of a balance-sheet recession to explain both Japan's "lost decade" and the Great Depression. Koo argues that as businesses found themselves highly indebted with assets that had lost value, their focus shifted from profit-maximization to debt-minimization, rendering monetary policy impotent, as no matter how low the interest rate, there simply was no demand for loans. This differs from other accounts, such as Shiller's, which states that, "In the Depression, confidence was so shattered that banks were holding vast unlent sums, and businesses did not want to invest in new capital even though interest rates were at abnormally low levels," in that the lack of demand for funds was a result of over-indebtedness. Koo goes on to very, very thoroughly explain exactly why he thinks so, citing a wealth of evidence. In Koo's view, when the private sector refuses to borrow, deflation can be stopped by the government stepping in and using fiscal policy, borrowing excess funds at a low rate and investing them in the economy to prevent further contractions. In his view, the government becomes the borrower of last-resort intervening to prevent deflation by mopping up all excess reserves and spending them, purportedly in projects with positive net present values,  until private loan-demand returns. Despite my disagreements with certain sections, Koo makes a terrifically good and convincing argument, relentlessly driving his point and shooting down objections before they arise. He shoots down deficit hawks by explaining how businesses returning to profitability with clean and lean balance sheets will produce above-average tax-receipts therefore helping the government clean it's own balance sheet. Additionally, Koo explains how premature retirement of fiscal stimulus would guide a country back to the deflationary path.

The Bad
The first two chapters are hard to read, they drag out and bang the concept of a balance-sheet recession into your head much like a high-school geometry class bangs the "y = mx + b" formula into students' heads. At one point, I felt like I needed to wave a white flag and say "Ok Mr. Koo, you win. Balance sheet recession it is!" Despite this, it is incredibly important to really understand the basic concept before going on to the fun stuff. Chapter 3, is titled "The Great depression was a Balance Sheet Recession" and that's exactly what you'll learn from it. It felt a little like reading a mathematical proof, but was nonetheless interesting. Chapters 4-7 is where the book really shines, though.

The Good
The final four chapters lack the academic dryness of the first three and Koo reads in a much lighter manner, with an incredibly high density of ideas and thoughts per chapter--there is definitely almost no fluff here. Koo outlines his thoughts on possible solutions; the problems of globalization; why normal tools don't work during balance-sheet recessions; monetary, fiscal and foreign exchange policy; and--my personal favorite--ongoing bubbles and balance-sheet recessions. From the problems of free capital flows and carry traders to the US housing bubble, the Chinese bubble and the problems with the German trade surplus, Koo enthusiastically navigates a diverse set of problems with incredible insight and, in hindsight, amazing accuracy for something written before many of these events transpired (2008). He takes no prisoners, doling out jabs to Krugman, Bernanke and Greenspan with no mercy, calling them out when they deserve to be and explaining why he's doing it. I really wish the last section had been eight instead of four chapters, but I guess then he'd be cannibalizing his own business at Nomura.

Conclusion
If you are interested in macroeconomics, read this book. Personal investors and traders are unlikely to find this a useful book if they want information they can use to do that whole turning money into more money thing. Regardless of that, this book really opened my eyes to certain scenarios I hadn't really thought about before. By and large, it wasn't an easy read, but it was a fascinating one. I stayed up night after night thinking about deflationary scenarios and playing "ying or yang economy?" (see image below) in my mind. I would rate this book eight out of ten stars. It was informative, interesting and no-bullshit. It did feel a little dry and academic at times and it really hammered the point at others, but I am confident I will be thinking about--and talking about--this book for quite some time. My biggest criticism is the assumption that the fiscal stimulus will be spent in value-creating projects / activities--I simply don't think politicians can be trusted to do this. Then again the book just explains how one could eliminate a self-feeding deflationary cycle caused by a balance-sheet recession, it never argues right or wrong, it just explains how to stop that, if that's what you want. And that is the question I was left with after reading this book, "is a little deflation really that bad?" I'm of the kind that thinks there is easy things in life and there is hard things, and sometimes you just have to do the hard things. 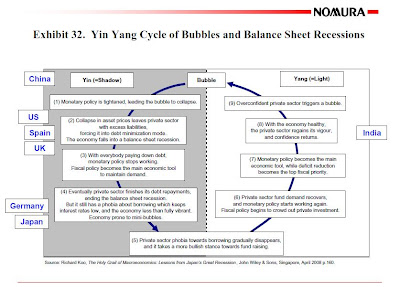 
German companies responded to the recession by taking advantage of the eurozone's large market and common currency to boost exports to regions with strong economies ... In less flattering terms it has pursued a policy of exporting unemployment to surrounding nations

if individual regions within a currency zone are allowed to run a higher deficit at will, the credibility of the common currency will suffer

asset-price bubbles are typically accompanied by a rapid increase of trading volume ... this gives market participants a false sense of security that those assets are very liquid, and that they can always get out if things start to go wrong.

I was shocked when I saw this, and even considered the Fed chairman had grown senile.

Journalists, meanwhile, are a very different breed. Many want to push for structural reform to change the old economic structure. By setting out an ideal vision for the Japanese economy, they can bask in a sense of superiority and omniscience. This tendency to play God and dictate the "right set" of structural reforms for governments to implement seems particularly strong among journalists based in the U.S. and U.K. But fund managers investing their own money have no time for such self-aggrandizement; they must constantly make prudent by-or-sell decisions based on market realities. Consequently, they are not interested in investing in a country shaken to its foundations by unrealistic structural reforms.