The title is just a joke, although the NYT isn't exactly my go-to when it comes to financial reporting. Anyway, Barry Ritholtz ran the following chart from the NYT today. 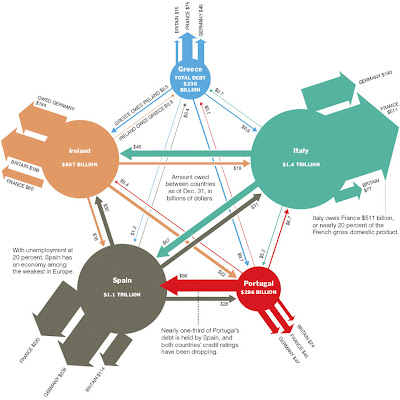 Which is cool and all, but by my calculations the debt looks quite different. Granted, this data is like 5 weeks old, but the gaps are so large in some cases that something must be wrong because there hasn't been that much activity in sovereign issues/redemptions. I'll pull up the data on Bloomberg some other time and give you an update, but at first glance, there is something deeply wrong with this graph. Either this is not sovereign debt or someone made a mistake. Maybe they are counting bank debt too? I don't know, but comment if you do. Take in mind NYT is reporting the debt in dollars. Considering EURUSD = 1.27 at time of writing, I think someone fucked up.


By my calculations:
UPDATE-1: I got a reply back from Bill Marsh at the NYT. His reply was so prompt and complete, that I feel bad I even make the joke about them. They really are an exemplary organization. They embrace digital media, new content delivery and monetization and are huge supporters of Open Source Software and open data initiatives. Apologies out of the way, here's what he said


the figures come from this report and are for the end of 2009. the data starts on page 74 and covers all countries (note that the numbers for each european country’s debt-holders are spread across pages 74, 78 and 82).

these figures include both government and bank debt. hope that helps!

Mystery solved! The data comes from the Bank for International Settlements. Unfortunately, this isn't such good news, and here is why:
Compare with: (credit: Marc P @ Big Picture)
By the way, this is why I hate it when they convert figures to dollars from their original currency. Liabilities and assets should be listed in the currency they are denominated in. Exchange rates are only valid for a very brief point in time, making the data kind of useless or hard to use once that piece of information changes.

UPDATE-2: It has been brought to my attention that the Ireland figure is probably vastly inflated by the debt from financial organizations with operations in the IFSC. My apologies for this glaring omission. (MB - 05/17/2010)