I read quite a few finance and economics blogs, many more than the list on the right would have you believe, and while they are really good for the most part, sometimes people make mistakes. Today I call out two people on their mistakes: Barry Ritholtz of the excellent The Big Picture and Jake of EconomPic Data, who makes some of the better eye candy in the economics blogosphere.

The Fed is full of Eeeeediots
This morning, Barry called the economists at the Federal Reserve innumerate.  As someone who has a decent grasp on numbers and studied economics, I resent that. Listen here, Ritholtz, the .com bubble was a no-brainer in 1999 and late 1998 and the housing bubble was obvious in 2005/2006 when even the Gawkerites had that long running joke about never being able to afford a brownstone in Brooklyn and "Flip This House" was a hit TV show. That all was straight out of "Extraordinary Popular Delusions and the Madness of Crowds

" but calling a nascent bubble in 2003/2004 wasn't so simple. I like to rag on timmay, benny, hankay and the maestro as much as anyone--although never Volcker, he's my boy--but they are not stupid, much less innumerate. Their version of  Do The Right Thing might differ from yours and mine, but we are just going to have to accept that since we can't vote for Fed chairmen ourselves.

Also, remember in 2004 Greenspan started to move towards higher rates, with 17 hikes? By 2005 the yield curve went inverted. I remember because I was in undergrad Money and Banking at the time and my teacher, an insufferably monotone man, was basically doing back-flips in excitement, telling us all about how special a moment that was and how we should consider revising our portfolios because he expected a recession.  Well, the point is the far end didn't move up. Whether it is because of what Koo calls "debt rejection syndrome" or not, I' don't know. The point is that the Fed DID move too cool down credit-fueled speculation but, if you believe Koo, the monetary approach was impotent. The Fed did the right thing, albeit too late and with tools that didn't work. Hindsight 20/20 etc. If you want to hate on the Fed and The Beard, maybe you should poke fun at His Beardedness' suggestion that the BoJ buy Ketchup, like Koo did. Yeah, Koo again. Goddamnit Barry, why can't you be more like Koo?!?!?! (j/k, you are much entertaining and your books was much more fun to read)

Sell in May and go buy secret-sauce bonds?
Today, Jake posted a graph of what would have happened if you invested in this instead of that. I hate those graphs, they are remarkably useless 99.9% of the time and are just screaming DATA MINING. As a fellow economist, I expected more from you Jake. 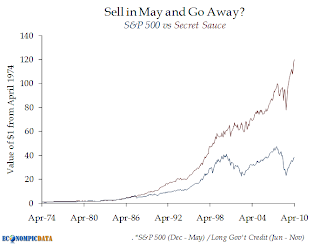 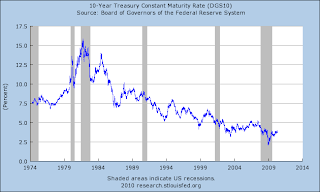 Seriously guy. Look at how that interest-rate graph behaved and look at how the secret-sauce portfolio started outperforming in the mid 80s when interest rates were coming down from all-time highs. Of course holding on to fixed income instruments at a time of dropping rates is going to result in gains, duh! Try the experiment again with floaters, callables or anything with negative convexity and see what happens. My guess is it won't be quite as spectacular. Try it with full-year "secret sauce",  or zero-coupons for the Summer and watch your fake portfolio make. it. rain.
By Unknown at 12:06 AM