This post is part of the series Housing Affordability 1971-2009
In the last post I talked about the growth in prices in percentage terms. Today's post includes the same data, but using a nominal scale. While I think the percent change charts are great for looking at long-term, the nominal charts do a better job of communicating the differences in dollars and cents.

Here we can see the relationship between the median-price for new homes and the purchasing power of a payment equal to 30% of the median-household income. Judging by the gap, my estimate of 30% is close, but not perfect. I discussed my reasons for using this figure in Two Ways of Looking at It.  Once I post the source spreadsheet you will be able to fill-in any values you want to see plotted for the %-of-income and down-payment variables. Please note these are not in log-scale because the actual figures became a harder to read. You can find the log-scale versions at the bottom of this post. 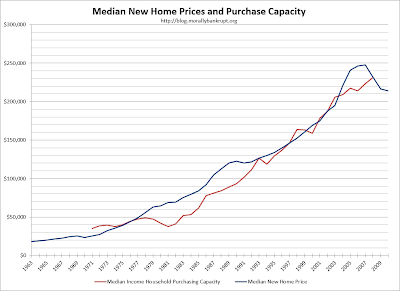 Below, we can see the same data plotted as monthly payments instead of totals. If the past is any indication of the future--and I believe it is in this case--I expect the lines to once again converge over the next couple of years. A return to the mean would require either real-estate appreciation, wage declines, interest-rate increases, or a combination of two or more of these variables. 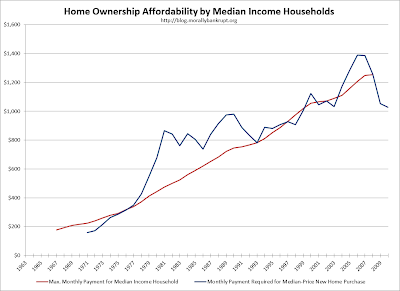 Does this mean that housing is cheap?
Measure in comparison to median incomes, yes, but that doesn't mean it isn't going to get cheaper. Another danger is future income-levels falling. I expect housing to have negative inflation-adjusted price gains for a couple of years as sales volume declines, increasing the time it takes to reduce excess inventory, both in existing and new homes. In addition, the recent decline in the home-ownership rate has probably left some people soured to the experience of owning a home or has damaged their credit-score or balance sheets.

Is it a bad time to buy?
I don't think so. I wouldn't rush out there in euphoria, but it's probably a good time to buy if you have job security and can qualify for a good rate on a property you like and are willing to live in. Like I said before, I would not be surprised if I saw prices slide downward a little more, but I would be surprised if it was a big slide. It all depends on what price bracket you are looking to buy and the price-to-rent ratios in the areas that are of interest to you. The mortgage-interest tax break and equity build up might be large enough for you to be able to absorb a small loss in value and still end-up ahead. In the future, I hope to do some case studies on individual areas (probably a few from the Case-Shiller Composite).

What about interest rates?
I don't have a crystal ball. 30-year rates are at record lows, but that doesn't mean they aren't going to keep going down if we find ourselves in a deflationary environment as a result of a balance-sheet recession. People in the inflation camp are getting ready for rapidly increasing prices, but with excess production capacity, elevated cash reserves in banks, and depressed employment, I think we have a couple of years before we start seeing any real inflation. This could mean lower rates and lower prices, but like I said, I don't have a crystal ball.

Finally, I believe that Bernanke will take his sweet time tightening. Increasing interest rates when Americans are collectively servicing $830B of revolving debt at 14% seems like something politicians are going resist. Increasing rates would also put downward pressure on the fixed-income instruments that americans have been moving to en-masse to over the last two years.

Well, if it's a good price to buy, why aren't more people buying and driving up prices?
Because they can't. Many people lost jobs, savings and homes as a result of the recession. Many more (almost 70% at one point) already owned a home. It is a real tragedy that, at a time when rates are at their historic lowest and prices have dropped so much from the peaks, the American consumer is in such a poor position to take advantage of these conditions, although of course this situation would have never presented itself if it wasn't for the crisis. This event will be a lost opportunity for consumers that were over-leveraged prior to the recession, but is allowing many savers and younger workers to finally purchase a home, and for those with sufficient liquid assets to trade-up, even if it means stomaching realizing losses, because lower interest-rates allow more borrowing capacity.

Finally, just for giggles, I add a chart with six of the previously used indicators, so you can see it all in one place. 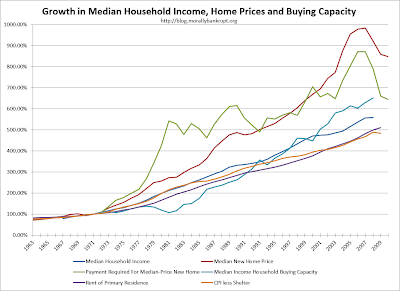 This is the final data post for the series. The next and last post will be a discussion about the underlying data, collection methods and possibilities for improvement. I will also include a link for readers to download the source spreadsheet with all the data so other people can benefit from the busy work of translating data series in PDF to a useable spreadsheet format.