More on the PIIGS Debt Coming Due

Yesterday I wondered about whether all of this PIIGS debt panic was warranted. I don't contest that there is debt problems that need to be fixed (and not just in Southern Europe), but I also don't think that there's any reason to be alarmed over the debt coming due in the next couple of months. If you would, however, want to be alarmed by the debt coming due in 2012, I'd completely understand. The reason I'm not alarmed is because those euros have to go *somewhere* once these bonds start coming due and while there may be some movement away from Greece, it's not like liquidity is going to suddenly dry up for sovereign issues and Euro area countries are going to be stuck, unable to refinance their debt. Yeah, they might have to refinance it at higher yields, but they will refinance it. Considering how low interest rates are right now, I wouldn't be surprised if the debt they are retiring is going to be refinanced at lower rates, reducing the debt service expense. I'm working on this last point right now, but it's very labor intensive.

Regardless of how many bad things you hear about these countries in the media, it's still sovereign debt, not corporate junk. It's not low-rated, you can repo it at the ECB and, most importantly, the other European banks are buying it. And you know what? As long as they can be repod for liquidity, the banks will keep buying these bonds and strolling carefree down the meadows of borrow short, lend long. Yields may or may not accurately reflect default risk, I do not know, but barring a huge, sudden jump in interest rates, this is just not that big of a deal. And since I don't see inflation in our near future, I'm not too concerned about that.

In the mean time, a weaker Euro will probably help support tourism and give a boost to manufacturing, buying everyone a little more time. 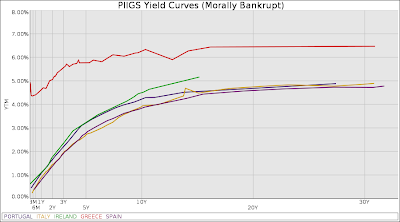 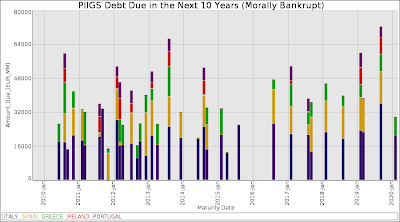 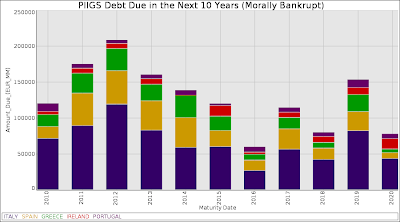