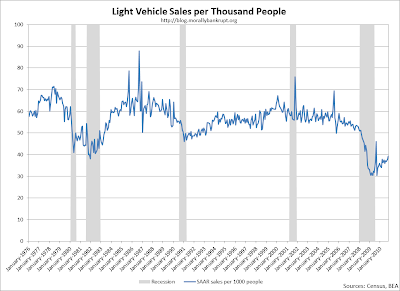 Monthly sales per thousand people at the SAAR rate. This is done by people and not number of drivers because statistics on licensed drivers are only released every two years. A fair estimation, for the present year, is about 68% of the total population (~88% of 16+ people are drivers and ~78% of the population is aged 16+). This figure has held fairly steady since 1990, before then drivers as a percentage of the population were as low as 50%. It is my opinion that the downtrend in the number of sales per thousand people ist he result of lengthening replacement cycles and a slowdown in the growth-rate of new drivers.

For more on driver demographics and trends in sales please see the Auto Sales Special Report posted in  late October.
By Unknown at 8:53 AM