Corporate Debt / Market Cap as a predictor of forward returns 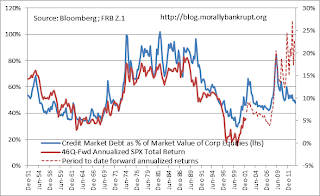 Earlier tonight, Matt Busigin tweeted a link to the series "Credit Market Debt as a Percentage of the Market Value of Corporate Equities" from the FRB's Z.1 report. After some back-and-forth with some other folks, Greg Merrill suggested that high debt to market cap looked like it it would correlate positively with forward returns. Intuitively, this works because, if we assume creditors are generally somewhat rational about underwriting standards, a sharp increase in Debt / Market Value would signify a sharp decrease in the value of equity from a level at which underwriters thought it was safe to lend. Stepping back, what we would be doing is measuring the "fair value" using debt as a proxy. 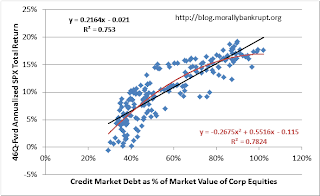 The actionable value of this exercise is questionable given the small sample size but, in my opinion, probably reflects the rational behavior of lenders and CFOs regarding debt levels.  The average Debt / Market Value ratio for the sample is 57%, which is 9.1% higher that the latest (Q3) reading of 47.9%. Since the end of Q3 the Wilshire 5000 has risen 6.84%, representing a market-cap increase of $1,229 billion. We currently have no estimate for net corporate debt issuance since the end of Q3 but, if we extrapolate Q3's 2.2% increase, we get an estimate of a current 45.8% debt to market-cap ratio, which would correspond to a pretty average 7.8% annualized forward return for the next 11.5y. This expected return stands in sharp contrast to much lower expected returns obtained with similar methods by John Hussman using non-financial market cap as % of GDP and the Price/Sales ratio of the S&P 500  as predictors. I should note here that this expected return also lies significantly above my own 10y expected return of just 4.5%.

Of course, the current Debt / Market Value lies in a particularly dense zone with significant dispersion, which--when combined with the 2.45% standard error of the linear regression--should give us pause as to the reliability of any such measure. In this particular casse, the expected total holding period is 132% and the -1 and +1 sd  bands would lie at 82% and 207% respectively--not exactly a Swiss watch.
By Unknown at 8:30 AM