In what seems like a yearly event now, with 3 consecutive years of this game, tax-exempt municipal bonds are once again cheap. It could be the overall bond sell-off, it could be the Detroit scandal, it could be bond fund outflows; I don't know what the cause is, but I do know the bonds are cheap.

Frequent readers know we are generally fans of quantitative methods, so expect some numbers.

In the last 5 years, our preferred proxy for the tax-exempt AAA market has disconnected itself the ratio range that was common until the global financial crisis. Due to the tax-exempt nature of muni bonds, benchmark yields were often quoted as a percentage of treasury yields instead of a spread, but this has become an increasingly inaccurate way to look at yields. We consider two options:
Although we agree with the assertions that, market-wide, the tax-exempt market has transitioned from rate to credit, we believe the AAA benchmark is exempt from this because of its information insensitive nature (for more on this see Slapped in the Face by the Invisible Hand by Gary Gorton) and while we generally agree about the repricing of liquidity post-GFC, we believe we have the ability to control for that (more later). A review of the data from 2001 to present day as well as our expectation of behavior by participants makes us believe the second option, that the "fair" ratio is dynamic, is the likely explanation. 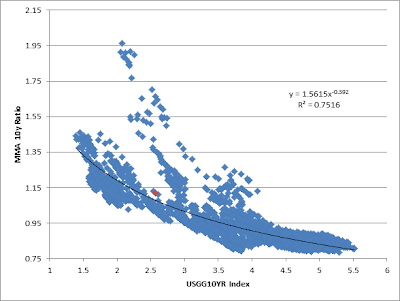 Although we do not put much weight on the automatically generated regression, we believe it to suffice as evidence that tax-exempt bonds tend to exhibit negative convexity, possibly from an absolute rate floor. Below you can observe 2001-present and June 2009-present time series with accompanying overlaid histograms showing ratio changes over time and the distribution of values within those time periods. Please notice the increase in ratios as yields fell to new lows as the adoption of forward guidance and quantitative policy by the Fed lowered 10y rates to new post-WWII lows and the apparent reversion of this trend after the secular low was printed in June 2012. 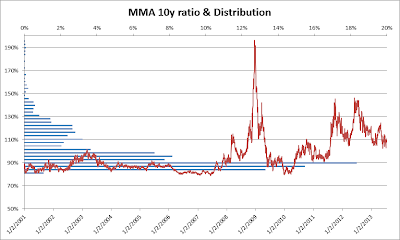 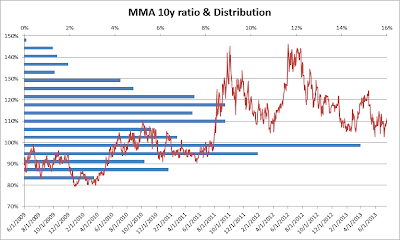 Continuing this general line of thinking, we explore a linear relationship between the AAA 10y tax-exempt yield and the 10y treasury yield and find strong evidence of a nearly constant  sensitivity of municipal yields to treasury yields of 0.587. 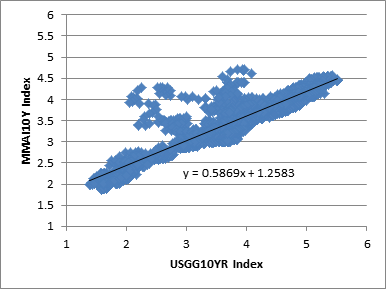 We expand this simple example into a multiple regression incorporating the MOVE index and the VIX index as a measure of treasury-implied volatility and a proxy for CDX.IG respectively. This allows us to internalize other credit-insensitive spread products into the model, namely MBS (for more information read about MBS replication) and high-grade corporate bonds.

To test for structural changes pre- and post GFC-, we slice the data into 4 time periods:
The results are reproduced below:

As you can see, outside the GFC-period, all of the variables are statistically significant, and the models exhibit high R^2s. Although there is mild colinearity between VIX and MOVE, the correlation is limited and the results are not invalidated. A test for heteroskadicity reveals no significant skerodasticity outside the November, 2008 credit meltdown.

The following table displays the correlation matrix between the residuals of various estimation methods:

Based on the very high correlations as well as a review of the residual time series, we don't believe there was a significant structural change after the GFC and believe the benefits of using a strictly post-GFC distribution are outweighed by the lower sample size. For the following illustrations, we use the model regressed from the full sample. A higher residual value represents a lower than predicted yield for the MMA 10y benchmark and a lower value represents a "cheaper" MMA 10y. The first chart illustrates the last year, where the "basis" is the residual of the regression, in percentage points. The second is a time series of residuals over the entire sample. 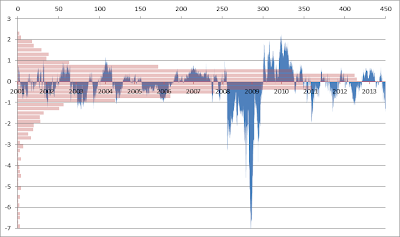 We think high-grade tax-exempt bonds are cheap. The yields we are seeing right now are usually associated with higher rate and/or higher volatility periods. Additionally, given the apparent turn in interest rates, we see the lower rate-sensitivity and accompanying negative convexity as fundamentally attractive features in a rising-rate environment. The loss in "upside" from the negative-convexity is more than compensated, in our opinion, by higher pre- and post-tax yields, and there remains significant price-upside if yields normalize to predicted levels in a sideways-rates market. We believe ample liquidity and accomodative monetary policy limits the risks of a 2008-like tail scenario, despite what a certain blonde talking-head (who, incidentally, triggered the last sell-off of a similar magnitude in early 2011) with no P&L to speak-of may be saying on TV.  Depending on how much zerohedge you read, your mileage may vary.

Tomorrow we will attempt to revisit the topic from a different angle, comparing tax-exempt credit to corporate credit to illustrate the difference in priced-in losses and then, sometime this weekend, we hope to touch on some vehicles the average investor can use to express a view on the sector.