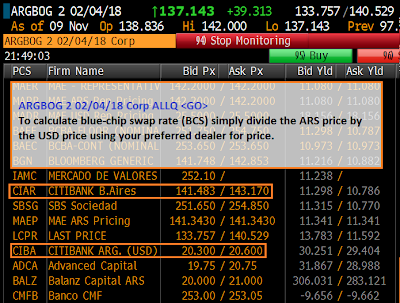 Quick post since I've been approached multiple times in the last few weeks about the calculation of the Blue Chip Swap Rate (BCS), a popular unofficial measure of the market-driven price of ARSUSD (NDFs settle against the official ARSUSD cross, which is tightly controlled by the central bank). As you can see, the current BCS for USDARS is ~6.86 vs the official rate at 4.77, representing a large premium on USDs by the Argentine population. With inflation persisting and Banco Central de la Republica Argentina (BCRA) keeping peso depreciation under the rate of actual inflation (and equal to the official inflation measure) the Argentine peso becomes more overvalued every day that passes, making exports increasingly uncompetitive in the global markets (reducing supply of USDs by reducing the current account balance), depressing the local economy and exacerbating capital flight despite a plethora of capital controls introduced over the last 14 months. The most likely ending for this situation is a sudden and violent devaluation similar to the Mexican devaluation of December 1994 once BCRA loses its grip on the exchange rate.

OtherRelated Readings:
Argentina surprised by Germany, which voted against granting a loan at the IDB
Argentine bonds fall following “selective default”
Argentina demands 1-for-1 on imports/exports (video)
By Unknown at 10:36 PM