How Hogs Get Slaughtered: Structured Notes

In case you don't know, I work for an Independent Broker-Dealer. Near me is one of our bond guys, he specializes mostly in brokering bonds and other fixed-income instruments and some flow trading. Throughout the workday we'll chat about this or that and every once in a while he sends me some issue to look at if he finds them interesting or attractive.

A couple of weeks ago, he told me about a new-issue, a 20-year Bank of America CD. It was a tax, free, FDIC insured, floating-rate structured note with a 9% coupon and call protection for a year. I jumped out of my desk and came to his Bloomberg to check the deal out. We are a pretty small firm, around $5B in assets, so I don't know why we were getting an allocation. After all, most of our brokers would be buying no more than a couple of hundred thousand, maybe $1MM at most, to split between their customers. Something had to be wrong, otherwise someone higher-up would have picked it up first. With 20Y Treasuries yielding less than 4%, I was genuinely puzzled. Then, I noticed the terms of the deal:

Yiiiikes! Let's go over each one of these features and see what they mean

Callable after 1 Year
If BoA finds a cheaper way of funding debt, they can call you. This means that as interest rates drop on the far side, the CD exhibits negative convexity. That is, it has a a ceiling for what it will trade at, because it has an embedded short call option, and declines in interest rates won't benefit you as the holder. This is more of an issue with fixed-coupons though, because here you are already exposed to rates via the floating feature.


Floating Yield
(30YCMS - 2YCMS - 0.875%) * . What does this mean? it means that the coupon of the bond is computed by taking the constant-maturity spread between the 30 and 2-year treasuries, subtracting 87.5bps and multiplying whatever is left by four. Your yield is primarily a function of the 30-2 spread. If the spread is above 87.5bps you get paid, if it isn't, you won't. In case you are wondering, the historical mean of the daily spread (Feb 1977- Aug 2010) is 90 basis points. That doesn't include the period between Feb 2002 and Feb 2006 when the treasury stopped issuing 30s. (The spread trended down during this period). The spread as of yesterday was 351 basis points. The all-time high is 384 basis points. Any spread above 312.5 basis points will hit the cap.

So let's take a look at how that spread has behaved in the past...

That gives us a rough idea of where the spread usually is, but let's get a little more geeky with it and plot the density of the observations (4000+)

With the spread at historically high rates, if one expects mean-reversion, one would expect the spread to fall back to it's historical range. Additionally, There has been 6 periods over the last 30 years when the spread has actually been negative. We can see the distribution is highly leptokurtic and reasonably balanced, so about half of the collected data-points fall bellow the mean of 90 basis points. That means that on about half of the days in the last 34 years, this note would have been yielding zero. That hurts. 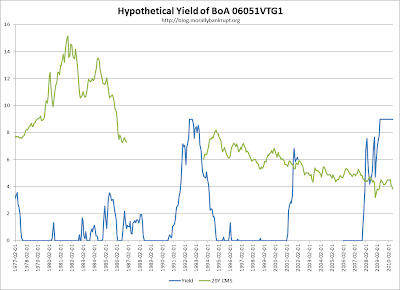 Cap and Floor
Pretty self-explanatory, we know that no matter what, 9% is the most the bonds will pay. This will only be an issue if rates rise significantly and very quickly, as the 9% cap is way, way above what the 20Y Treasury is paying. It does, however, limit your yield at times like today, when the 30-2 spread is so close to historical highs.


Conclusion
Wall St. is smarter than you. You are not going to get an FDIC-insured note yielding 9% for 20 years when the 20Y treasury is yielding under 4% just because you deserve the extra yield. Every part of this note has been engineered to take advantage of yield hogs' greed. If I had to put my hand in the fire, I'd say whoever buys this note is going to be holding a note that yields zero for a very, very long time.

Below I attached a second graph for a similar note that's a little more attractive, but lacks FDIC-insurance. The same things apply, it's just the formula that's a little different. 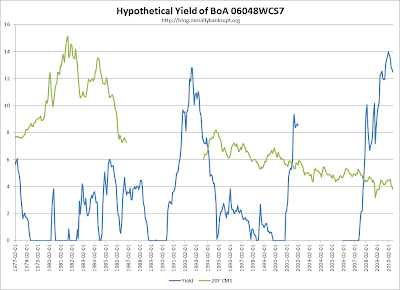 Disclosure: If I could lock-in a borrow, I would short the fuck out of these notes and long a 20Y treasury with a matching maturity. I also bet the aforementioned trader $100 that next Aug 1st the spread will be < 190 basis points. (mean of 90bps and standard deviation of 116.9bps)
By Unknown at 12:24 PM